WARNING: Malicious link in previous post (or, adventures in African computing). Cross-post from my other blog; both of these seem to have been compromised through my WordPress account.

Jason (that’s me) has just launched his own solo blog, Ceteris Non Paribus. I’ve got a post up explaining why I’m doing it, as well as my first real content. While I hope to continue making posts at ML occasionally, especially debates with my co-bloggers, you’ll mostly find me over there in the future.

The development impact blog summarizes encouraging recent progress toward eliminating malaria. Regular readers will be aware of the growing body of evidence indicating that early-life malaria exposure significantly stunts education and wages for people’s entire lies. Thus this potentially huge win is even bigger than it looks. Fingers crosses for continued success in this fight into the new year and beyond.

A Historical Argument Against Paid Organ Donation: Plasmapheresis and HIV

Alex Tabarrok of Marginal Revolution links to a very compelling case for paying organ donors, made by Alexander Berger in a New York Times op-ed. The counter-argument has always been that this will lead to the exploitation of people, especially the poor. What I find striking is that the debate, as I have seen it, has rarely if ever referenced the best example of this actually happening. In Chapter 12 of the excellent The Origins of AIDS, Jacques Pepin highlights paid plasma donors as a crucial vector in the early spread of HIV-1. A few potent excerpts:

In rural areas [of China],  poor farmers were recruited by ‘plasma pimps’, to sell plasma to increase their meagre income. They received $6 per donation, which could be repeated twice a month in theory, more often if donors attended more than one collected centre. […] In the most-heavily affected provinces […] approximately 250,000 paid donors (a quarter of a million!) acquired HIV.

What do these stories have in common? Poor people looking for a quick source of income and willing to sell their blood repeatedly. Profit-driven blood collection centres where a small number of entrepreneurs try to make as much money as possible by cutting costs, re-using needles, syringes, and tubings, while being unaware of or not caring about the risk of transmitting blood-borne viruses. A lucrative market for these blood products, either locally or internationally. Finally, a ‘patient zero’ who introduces the pathogen.

Pepin also cites incredibly dangerous practices such as the pooling of blood from multiple (ABO-matched) donors for plasma separation, with the cell matter divided among all of them for return to the bloodstream. The system was ripe with abuses. Strikingly almost all of this appears to have been driven by blood collectors or donation centers, rather than risk-taking by actual donors. And of course all organs and blood donations are always sold, often at a substantial profit, by the extractors – we are arguing only over paying the donor him- or herself.

The lesson here is not that paid organ donation is a bad thing – all of Berger’s points are entirely valid ones, and any risks can be controlled. But we should address the strongest arguments against this option, to see how to deal with them. In particular, careful regulation of the extraction of donated organs is always important but becomes moreso the more that high prices for organs induce potential entrepreneurs to enter the market. We have a handle on HIV transmission now, but need to be on guard for the next potential disaster. The danger is that the case for paid organ donation seems so obvious that, in bringing it about, we (perhaps willfully) ignore the risks associated with it.

This week U.S. Secretary of State Hillary Clinton announced that the U.S. would fight for gay rights throughout the world, stating “it should never be a crime to be gay” regardless of a country’s culture or religious practices. In many nations, homosexuality is illegal and, in some, punishable by death. This includes many countries with which the U.S. has close ties.

The U.S. plans to effect change by using both diplomacy and foreign aid to influence governments as well as taking risks associated with sexual orientation into account when reviewing asylum applications. America’s announcement comes on the heels of October’s threat by U.K. Prime Minister David Cameron to withhold aid to country’s that do not protect gay rights. 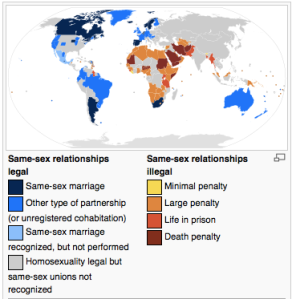 That is too much red.

As someone who opposes the criminalization of sexual acts between consenting adults, I’m excited by this development. I also believe it’s a far cry from colonialism (as suggested by a Ugandan presidential aid) for a donor country to make the protection of human rights a precondition for aid; I would assume criticism would be muted if the vulnerable group in question were an ethnic minority rather than homosexuals.

I doubt very much the U.S. or U.K. is planning to cut off ties with countries that have legislation hostile to gays. Rather, they are leveraging their existing relationships to encourage more progressive legislation and to foster a more accepting environment. This isn’t a case of using a carrot or a stick. It’s more a matter of being willing to withhold the carrot in the name of gay rights human rights.

I have to admit a degree of skepticism about some of the details. Nonetheless my heart goes out to the victim – it’s hard to believe he would suffer this kind of public humiliation by choice.

For context, there are as many as several dozen reported rapes of women in Harare each month.

Can an academic institute fight poverty?

Our more diligent readers may have noticed that a large number of MethodLogical contributors are Stanford alums (football team currently ranked #3 in the country). This may be because Stanford students are uniquely qualified to shape development policy or simply further proof of the imprecision of snowball sampling– you be the judge. Nevertheless, imagine our pride at learning that Stanford’s Graduate School of Business was recently the recipient of a $150 million donation to develop the Stanford Institute for Innovation in Developing Economies (SEED).

In addition to supporting research, the focus of the institute will be on funding students to work and study abroad and to bring students from industrializing nations to Stanford to help develop their ideas. The institute will also fund classes focusing on poverty alleviation.

On campus, we call it The Farm.

Universities have played a large role in expanding global health and development programs, but, as research-based institutions, are they the best candidates for this task? As I’ve written in the past, it is not enough to judge a program’s effect in isolation; instead, we must consider the cost-effectiveness of the program and consider what could have been achieved if the same resources had been invested in a different undertaking. While certainly more meaningful than a new gym or auditorium, is this the best use of $150 million? Would an NGO or a non-profit engaging in direct action rather than research have been a more impactful recipient?

SEED may bring innovations to this farm.

It’s hard to say. If SEED facilitates the invention of a disruptive technology that revolutionizes development–a veritable global health Google–then sure, this was money well spent. More realistically, we will witness scads of good but not great innovations, many of which may have arisen without this donation, presenting a murkier picture. As someone who studied HIV and public health in South Africa through Stanford, I understand both the power and the limitations of such experiences.

The purpose of this post is not to be ungrateful. This is a huge donation for a good cause and presents a profound opportunity for Stanford. It’s now up to the university to realize its potential.